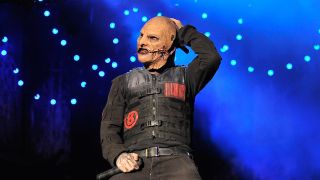 Slipknot and Stone Sour frontman Corey Taylor has expressed his despair after Donald Trump was elected to be America’s 45th President.

Republican candidate Trump swept to victory against Democrat Hillary Clinton, defying polls which had Clinton ahead almost throughout the campaigning run.

And many figures from the world of rock and metal have reacted with shock at the result, many saying America had made a huge mistake.

Taylor has previously been vocal in his dislike for Trump and after learning of the billionaire businessman’s election, the singer says: “I didn’t think my country could be this fucking stupid or hateful. I’m disgusted.

Referencing Trump’s attacks on minority groups throughout his campaign, Taylor adds: “Do yourself a favour – find some friends in the black/latino/LGBT communities tonight. They’re going to need your help - possibly protection.”

On Trump’s policies, Taylor previously said: “Trying to get people to equate Muslims with terrorists is just trying to control and manipulate one more group of people.

“His stances on Muslims and Latinos and his absolute silence on Black Lives Matter prove that he is unprepared to bring people together.

“He is prepared to tear them apart so he can control them.”