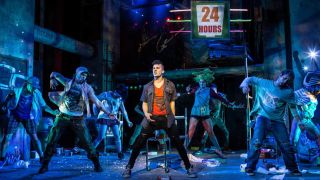 The award-winning Broadway show arrived in London earlier this year and will wrap-up at the city’s Arts Theatre, Leicester Square, on November 22.

And it’ll tour across the country starting at Leicester’s Curve in March.

The production will see the return of Amelia Lily in her role as Whatsername in the show, which features Green Day tracks including Boulevard Of Broken Dreams, 21 Guns, Wake Me Up When September Ends, Holiday and American Idiot.

Tickets for all shows with the exception of Cardiff dates are available via the musical’s official website.

Green Day documentary Heart Like A Hand Grenade, filmed when the band were recording American Idiot in 2004, will be released in cinemas around the world on November 11.