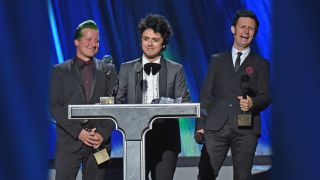 Green Day frontman Billie Joe Armstrong thanked his bandmates for their support as they were inducted into the Rock And Roll Hall Of Fame last night.

Armstrong – who went to rehab in 2012 after a public meltdown – said: “I’m lost for words right now. The gratitude I feel is overwhelming.”

He told co-founding bassist Mike Dirnt: “You are my musical soulmate. I love you so much, and I thank you so much for your friendship.”

And he described Tre Cool as “the most dangerous drummer on the planet.”

The singer and guitarist acknowledged the presence of Paul McCartney, Patti Smith and others in the crowd, saying: “It’s like my record collection is actually sitting in this room.”

Cool said of the fact that his band were inducted on their first year of eligibility: “I remember when we were sleeping on couches. I didn’t think we’d be where we are right now – I thought it would take another year or two.”

Green Day delivered a three-song set following their speeches, including American Idiot, When I Come Around and Basket Case.

The band played a warm-up show in Cleveland on Thursday, their first in almost a year, with former drummer John Kiffmeyer taking part as a guest.