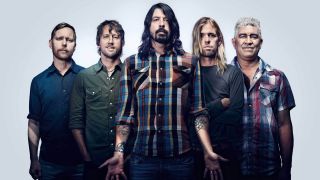 Foo Fighters have been confirmed as Glastonbury 2017 headliners.

They made the announcement last night during a secret show at the Cheese And Grain venue in the Somerset town of Frome.

Speculation had been mounting all week that Dave Grohl and co were about to make a Glastonbury announcement after some fans received promotional ‘boarding passes’ featuring the band’s logo inside a pyramid. They’ll now take to the Pyramid stage on June 24.

They were due play at the festival in 2015 – but were forced to pull out when Grohl broke his leg during a show at the Ullevi Stadium in Gothenburg.

Glastonbury organiser Emily Eavis said: “We’re incredibly lucky to have the Foo Fighters headlining on the Saturday night this year. It was obviously devastating when they had to pull out in 2015 – and the thought, effort and generosity they’ve put into this announcement is just unbelievable.”

Following last night’s gig, Grohl posted a handwritten note on Facebook which reads: “Just wanted to write and say thank you to all involved tonight because I’m still buzzing from our first gig in one year, three months and 10 days.

“Shaking off the dust for the sweet people of Frome was the best way to dive into another year… and many more surprises. Stay tuned.”

Radiohead were confirmed as the headline act in October last year.

The Dave Grohl Quiz: how well do you know the Foo Fighters frontman?