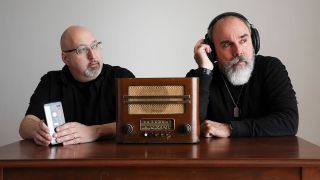 US prog rockers Glass Hammer have released an extended teaser video for their upcoming new album Dreaming City, which the band will release on April 17. Bandleader Steve Babb describes the band's new concept album as a story about "finding hope in the midst of despair", and you can watch the trailer in full below.

"Dreaming City rocks a lot harder than many of our previous albums," Babb tells Prog. "But we are experimenting now with blending many genres, from 70s classic prog to space rock and synth-wave. 2018's Chronomonaut was a big hit for us, so we want to keep that momentum going. We never want to make the same album twice though, so expect some big surprises on Dreaming City."

“There is so much going on [on Dreaming City]," he continues. "From the sword and sorcery storyline to the marriage of so many different styles of prog, electronic music and metal. We have been changing our approach to album production over the past couple of years and Dreaming City is the highlight of that effort.”

The band plan a full music video release of the album’s title track closer to the release date release date. Glass Hammer were scheduled to perform on this year’s Cruise To The Edge where they were to be joined on stage by former singer and current Yes front-man Jon Davison for two songs. Cruise To The Edge has been postponed, but the band plan on performing when the cruise is rescheduled.