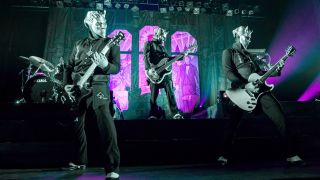 Ghost’s follow-up to 2015 album Meliora will be “darker” and the subject matter will feature the “return of a deity” according to one of the band’s Nameless Ghouls.

Describing Meliora as a “pre-apocalyptic” record, the Ghoul says their upcoming fourth album – expected in 2017 – will be a natural progression on that theme.

He tells Whiplash: “Let’s just say that it’s a continuation of Meliora, but it’s sort of a response. I’ve used the word ‘pre-acopalyptic’ on Meliora. It’s sort of the height of civilisation – it’s symbolism.

“Just look at the cover, skyrisers and everything. You don’t even see the ground. It’s all covered and built material.

“And, obviously, there has to an end to that. So there will be a call and response. And the next album will be the response to that.

“So if there was an absence of a God, there might be a return of a deity, which usually comes in horrible form. So it will be a darker album.”

The gap between Meliora and the next album has been filled by the release of Ghost’s successful Popestar EP, which spawned the lead single Square Hammer.

The Ghoul also discusses the band’s anonymous personas, saying he’d hate to be in a “normal” band.

He adds: “From a practical point of view, of course it would be more convenient to just be a normal band and just let it happen and just be yourself. Everything nowadays is about content. Content means online chatter about clips, news, a picture — anything that creates ‘likes’ and comments.

“If we were a so-called normal band, we can just create 20 posts a day, just filming what we just ate and how it looked when it came out. All of these sort of unnerving hysteric things that most people do.

“From a personal point of view, I’m very happy that we’re not – or at least I am not personally – doing that. I have no Facebook, I don’t have Twitter, I don’t have Instagram. I have an old Hotmail address.

“I managed to sort of dodge the whole social-media thing. Obviously I live in a world where that surrounds me, so I know what’s going on, but I don’t follow it.”

Ghost have a handful of dates on their current US tour still to come.

Ghost: We have Satan on our side