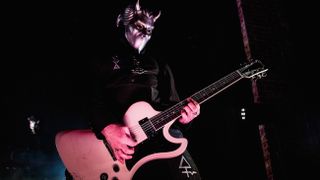 A Nameless Ghoul from Ghost says time has helped the band convince American audiences there is more to them than their “Satanic” image.

Asked how they overcame the initial resistance that they faced in America, the Ghoul jokes: “It’s because of Satan, of course. We have him on our side.”

He goes on to say that people have slowly come round to the idea that Ghost aren’t all bad. He tells the Salt Lake City Tribune: “I think that, with the test of time, we were able to embroider a somewhat multifaceted palette a little in order for people to sort of get the fact that we’re not necessarily, as I said, as black and white as people might have thought of us a few years ago.

“Back then, it was never really an issue of breaking through in America from a commercial point of view. Because, to begin with, it was never on the agenda at all.

“Of course we wanted to tour America, but it was never on the agenda to be part of any establishment or any part of radio culture, let alone be given the opportunity to be nominated for Grammys and stuff like that.

“I think that it might be also a question of the cultural climate, the theological climate. I know some people that work in certain places where they might have shunned away from us in the past, they say right out, ‘Well, first of all, we thought you were a Cookie Monster band, and then we thought you were all Satanic, but then I noticed that you’re theatre! So that’s fun, that’s entertainment!’ You know, call it what you will.”

The Ghoul also says the band are smart enough not to force the occult element of their sound and image for fear of bringing about unwanted consequences.

He says: “It doesn’t necessarily have to be anything offensive, because you can just see it as theatre. And I think that that’s probably the one thing that might set us apart a little from a lot of the more classical, you know, historical bands that had a Satanic album or a Satanic image, where it was basically a person in that band telling the world to do this or that.

Ghost’s Popestar EP debuted at the top of the Billboard chart, powered by the launch of new track Square Hammer. The release also includes covers of the Eurythmics, Echo & The Bunnymen, Simian Mobile Disco and Imperiet.

The band are on the road in support of the EP.

The Walking Dead: How Ghost Rose From The Grave