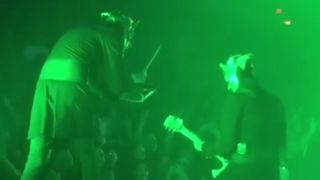 A still from Ghost's clip

Ghost recruited a cowbell player for their two Texas dates.

The sixth Nameless Ghoul performed onstage during their shows at Lubbock’s City Bank Auditorium and San Antonio’s Aztec Theatre last week. The two shows saw the Swedish outfit add two older songs to their setlist, If You Have Ghosts and Elizabeth.

Ghost say: “While in Lubbock, Texas last night, Ghost brought back If You Have Ghosts. If you look closely you might just see a mystery sixth Ghoul on cowbell.”

In a second video shared by the Swedish band, in which frontman Papa Emeritus orders the Nameless Ghoul to climb down from a stage monitor, they say: “Papa does not seem that impressed with that Cowbell Ghoul. However, another amazing ritual in San Antonio.”

Meanwhile, a Nameless Ghoul recently explained why the evolution of the music industry and the focus on streaming services is actually “good” for music. They’re currently working on their fourth studio album.