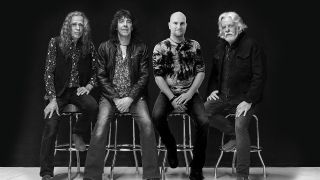 The triple CD set celebrates the band’s five decade journey in the world of rock, from the Fantasio Club in Dortmund to the leading venues of Chicago where they recorded their classic Outside The Law album in 1974, supporting the likes of Yes, Black Sabbath and Argent along the way.

"1969 was the year we founded Epitaph," says guitarist and vocalist Cliff Jackson. "The lyrics of the song, with its critical view on the world, fit what is happening now. It was important to us to arrange this title with our twin-guitars and a cello to create a contemporary Epitaph rock song."