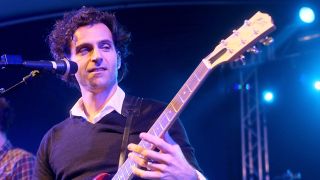 Dweezil Zappa has been forced to change the name of his tribute show Zappa Plays Zappa following a family feud over copyright infringement.

After a decade of touring, the project has been renamed Dweezil Zappa Plays Frank Zappa amid legal disputes between the guitarist and the Zappa Family Trust over trademarks and music licensing.

Dweezil tells the New York Times: “It doesn’t exactly roll off the tongue, but this is being done under duress. I just hope people will understand that the only thing I’m changing is the name.”

All four of Zappa’s children are beneficiaries of the Zappa Family Trust. Following the death of their mother Gail last year – who managed Zappa’s musical legacy since his death in 1993 – Ahmet and Diva were left in charge of the organisation as its trustees. Their threatened legal action has fuelled tension with their siblings, Dweezil and Moon.

The trust claims that they own the Zappa name, and that Dweezil risked copyright infringement damages of $150,000 each time he played a song without proper permission. The late rock icon’s likeness is also controlled by the trust, and so Dweezil could neither use it to promote his show or sell official merchandise on tour.

Dweezil confirms that by changing his live show name, he has emancipated himself from the demands of the estate – but the battle has divided the once tight-knit family.

Earlier this week he re-posted a Tweet from Moon Zappa that said, “Thank you for grieving the horror and injustice with Dweezil and me. Love over gold is in actions, not words, no matter the moustache disguise.”

Ahmet previously said: “I am not standing in the way of Dweezil playing the music. He would just have to be in accordance with the family trust.”

Meanwhile, the next round of Frank Zappa reissues including Lumpy Money Project/Object and the Road Tapes collections will be released on CD on May 27.

A documentary based on the life of Frank Zappa named Who The F*@% Is Frank Zappa is also in the works after filmmaker Alex Winter successfully raised $1 million for the project. Release details will be revealed in due course.