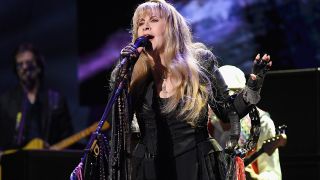 US rock legends Fleetwood Mac have been forced to postpone the remaining dates of their North American tour.

They had to pull recent shows in Philadelphia and Boston due to Stevie Nicks having the flu, but as she recovers, the band have now cancelled the upcoming dates in Toronto, Winnipeg, Edmonton and Calgary.

Also affected is Fleetwood Mac’s appearance on May 2 at the New Orleans Jazz Fest.

They were booked to take the place of the Rolling Stones at the festival recently as Mick Jagger recovers from heart surgery.

A Fleetwood Mac representative says (via Rolling Stone): “As an update to previous Fleetwood Mac posts regarding a band member illness, Stevie Nicks has the flu.

“While she is feeling better already, management has consulted with her doctors and have decided to reschedule the remaining four shows of their North American tour to allow for her full recovery.

“Due to sports playoff schedules and existing touring commitments in Europe and Australia, we are looking to move rescheduled cities to October/November 2019. Ticketholders will receive new dates and details shortly.

“Unfortunately the band will not be able to perform at Jazz Fest in New Orleans on May 2.”

Last month, Stevie Nicks was inducted into the Rock And Roll Hall Of Fame as a solo artist after Fleetwood Mac were enshrined in 1998.

She took to the stage to sing Stand Back with guitarist Waddy Wachtel and was then joined by Don Henley for Leather And Lace. Nicks also performed Stop Draggin’ My Heart Around with Harry Styles, before concluding with Edge of Seventeen.