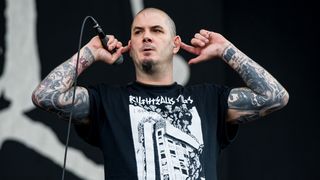 Phil Anselmo says his upcoming stint as Eyehategod’s guest vocalist is “not about me.”

It was announced this week that the former Down and former Pantera frontman would fill in for Mike Williams for two shows – at Southport Music Hall in New Orleans on August 19 and at the seventh annual Gwar B-Q in Richmond, Virginia, on August 20.

Williams is taking time out to deal with an unspecified health issue and said he gave his full blessing for Anselmo to replace him temporarily.

And Anselmo is keen to move the focus away from himself and on to Williams’ recovery.

Anselmo says: “These gigs are not about me, it is about keeping the obligations of Eyehategod so, as a band and force, they are able to stay true to their commitments to these two gigs.

“My admiration of Mike and all his works, especially Eyehategod, knows zero boundaries, hence, me doing these gigs.

“In light of Michael D Williams’ health issues, which he needs to address more importantly than any other point in his life, and should be respected by anyone with a heart, I will do my best to fill in for him. Those are mighty big shoes to fill, but I shall do my best, once again.

“I do believe I speak on behalf of the concerned parties when I state that we all need Mike to heal, recover, and get better as soon as possible.”

Anselmo echoes Williams’ earlier statement that the two go back a long way and says he didn’t hesitate to help out.

He adds: “When our brothers in one of New Orleans’s most influential music outfits needs me, I’m there, 1000%.

“There is no secret that I adore my brethren in Eyehategod, as I’ve always supported them through thick and thin. This present situation will be no different.”

Anselmo has been working on his new project Scour since the fallout from his “white power” outburst earlier this year.

Phil Anselmo believes Down will come ‘back together’