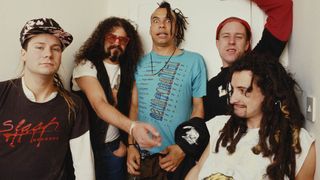 Faith No More have given more details on the reissue of their debut album We Care A Lot.

Last year, bassist Billy Gould said they were planning on re-releasing the Chuck Mosley-fronted 1985 album, which has been unavailable commercially since 1996.

Now, they’ve revealed the reissued version, titled We Care A Lot (Deluxe Band Edition), will be out on August 19 via Koolarrow Records and will feature a remaster of the original album along with alternative mixes, demos and live cuts.

Gould says: “This was an album that started as a demo before any label had any interest in us. There were a couple of reasons we decided to release this now.

“First of all, it’s been 20 years since it has been commercially available. Secondly, when cleaning out my basement, I discovered the original master reels, and we all thought that resurrecting this from the original tapes would be a great way to reintroduce We Care A Lot into the world.

“Lastly, this has been a band effort – we are releasing this in the same way as we recorded it, deciding everything amongst ourselves and getting our hands deep into the nuts and bolts, just like we used to.”

Mosley says he was “privileged” to be a part of the album and adds: “The other guys were so cool, and there was so much camaraderie. And that came across in the music – Bordin’s drums battling it out with Billy’s bass in antagonistic harmony, Roddy’s melodic atmosphere, swallowed up by Jim’s crunchy metal riffs.

“I found my place somewhere between them all, and when the album was finished, it didn’t sound like anything else.”

Mosley, who was replaced by Mike Patton before the band released 1989’s The Real Thing, is due to head out on his Reintroduce Yourself Tour later this month. Faith No More issued their seventh album Sol Invictus last year.