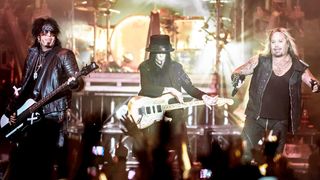 Nikki Sixx has predicted that the former members of Motley Crue are unlikely to spend any time with each other in the future – adding that they’re “not enemies but not friends.”

His comments appear in the band’s concert movie The End, shot during their farewell show in Los Angeles in December.

Drummer Tommy Lee said last month that he, Sixx, Vince Neil and Mick Mars had gone their separate ways after the show without saying goodbye to each other, and that he hadn’t spoken to Sixx or Neil since.

In The End Sixx says (via Hollywood): “We probably won’t see each other. We don’t hang out now. We go on stage like motherfuckers but we don’t hang out.

“We’re not enemies, but we’re not friends. I’ll probably never see them, except in passing.”

“I don’t know if other bands of our stature go through some of the crap that we go through. That’s the tough part – being onstage and doing that stuff, that’s the easy part.”

He adds: “We’re all here for the same reason – give everything for this tour and for our fans. Then, just walk away.”

The End will be screened in selected cinemas on June 14, with a DVD release expected later. Work on the movie version of Motley Crue’s The Dirt book continues.