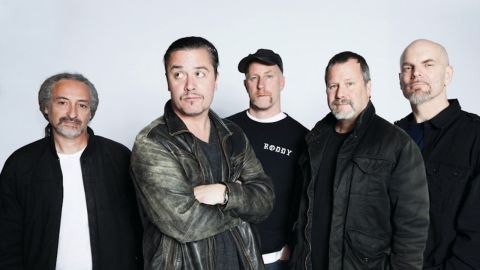 For a band that had deftly eluded all attempts at pigeonholing for nearly two decades, Faith No More’s 1998 break-up was ironically predictable. As the unrelenting pressures of mainstream success battered their hull, internally, the musicians – vocalist Mike Patton, keyboardist Roddy Bottum, bassist Billy Gould, guitarist Jon Hudson and drummer Mike Bordin – had grown weary of striking the hard-fought creative compromise that had underpinned each album.

This very tension – which had invested their music with such prismatic vitality – would ultimately tear the band apart. On the heels of their sixth outing, Album Of The Year, they formally disbanded. After years of steadfast denials regarding any manner of reunion, FNM’s 2009 tour announcement was met with eye-watering joy among the faithful./o:p

But the band were never going to reunite only to slog through the same setlists they played 20 years earlier; instead they began writing fresh material to have something new to play on the road. More songs would emerge and this May sees FNM’s first clutch of new music in 17 years – their seventh studio campaign, Sol Invictus./o:p

The titular opener rings in their new chapter with a sombre, piano-driven dirge filled out with a pulsating riff and stark atmospherics – in short, precisely the sort of unanticipated manoeuvring one might expect. And if anybody had feared that the passage of time had mellowed the lads, their DJ-vexing first single, Motherfucker, eviscerated such concerns in a profane cavalcade of shout-out vocals, vitriolic lyricism and a stratospheric climax.

Scorchers abound. Hurtling tempos cast the breathtaking Superhero into a storm of buzzsaw riffs and Mike’s throat-shredding howls, while Cone Of Shame opens at high noon in a spaghetti western, adorned with echoey guitars and a baleful spoken-word passage, converging in a siege of concussive rhythms that drop like sledgehammers. Separation Anxiety pits Mike’s unhinged falsetto against rapid-fire lyrics, as brooding rhythms gather and erupt into the neckbreaking beatdown of the chorus. This is a defining hallmark of the band’s sound.

Time and again they demonstrate a capacity for crafting chest-beating, anthemic hooks that bands like the Foo Fighters could only hope to write, and yet rather than release the full-on mainstream hit of which they are capable, FNM embed these interludes within slow-burning forays of experimentalism.

Tracks like Sunny Side Up (earworm alert) and closer From The Dead set vibrant melodic counterpoints to the heavier fare, and while not all tracks are as immediate, Matador, Rise Of The Fall and Black Friday each reveal uniquely-absorbing dynamics, given a bit of time to breathe.

It would be a grave mistake to hold an album of such depth and maturity to a lesser standard of scrutiny out of some well-intentioned but misguided sense of nostalgia. There’s simply no need; Sol Invictus stands easily on its own, rising shoulder to shoulder with the very best of the band’s catalogue – a thrilling, ambitious and multidimensional voyage that grows progressively more satisfying with each successive spin. Brilliant.

YOU PRODUCED AND MIXED THIS ALBUM YOURSELVES. WAS THERE SOMETHING ABOUT THE OTHER ALBUMS THAT YOU WANTED TO AVOID?

“We’ve recorded in some very nice places in the past, so I’m not sure ‘avoid’ is the right word to use, but we did set out to do this differently. As we recorded in the band rehearsal space, there was no way we were going to get that ‘high end’ studio sound, so what we did was depart from a clinical approach, and maybe embrace character and imperfection a bit more. We also opted to keep all of the work between ourselves, and didn’t bring anyone in from the outside. As we are very comfortable around each other, this made for some strong performances.”

SOL INVICTUS IS UNLIKE PRETTY MUCH ANYTHING ELSE ON THE RECORD. WHY DID YOU CHOOSE THAT AS THE OPENER?

“If you ask me, every song on the album is different from everything else. We picked that song first because it sets the tone for the rest.”

THIS TIME AROUND YOU DIDN’T ALL RECORD THE MATERIAL TOGETHER, BUT OFTEN IN SEPARATE SHIFTS. IN HINDSIGHT, WAS THAT GOOD OR BAD?

“While this is true, the method wasn’t that much different than how it was in the past, where we would record the entire song together but then spend a considerable amount of time overdubbing parts. The process probably took a bit longer than it could have, but then again, there were benefits to that, too; it gave us time to digest what we were working on and the option to rework something if it didn’t feel right. That was a luxury we never had before, when we were always on the clock.”/o:p

The story so far…

Three years after dismissing singer Courtney Love, FNM’s debut explored an ambitious range of styles, but Chuck Mosley’s considerable vocal limitations underscored that they had yet to find their man.

FNM introduced new singer Mike Patton with a bone-powdering amalgam of funk, metal and pop that pillaged the charts, hijacked MTV and earned a Grammy nomination for Best Metal Performance.

Labelled by many as ‘commercial suicide’, FNM followed up their biggest album yet with 13 eclectic head-scratchers (including the disastrous Jizzlobber), united only in their astronomic lack of mainstream appeal.

Long viewed as FNM’s final statement, this mature, melodic and criminally-underrated effort featured their poppiest turn yet in Ashes To Ashes, alongside the bludgeoning onslaught of Collision and Got That Feeling./o:p