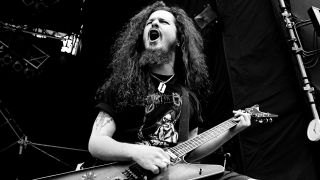 Hellyeah have made their cover of Phil Collins’ I Don’t Care Anymore featuring Dimebag Darrell available to stream.

The band announced last month that they’d include archive recordings of the late Pantera and Damageplan guitarist on their upcoming album Undeniable.

Drummer Vinnie Paul unearthed an old tape of his late brother performing the 1982 track from an incompatible circa-2004 computer programme – which they originally recorded for their follow-up band Damageplan before Dimebag’s death.

Paul tells Rolling Stone: “When our producer Kevin Churko got the tracks isolated, he synched them up, and when we listened them it totally gave me goosebumps. We’ve always felt like he’s been a part of this band since day one.

“We felt like his energy and his spirit was always with us. And for people to be able to hear him again in 2016 puts a big smile on my face.”

Vocalist Chad Gray adds: “It was like Dime was in an iso-booth tracking in the next room while I was singing my parts. Tracking that song was one of the most magical moments I’ve felt in my entire career.

“After we recorded the first four vocal lines, Kevin called me on the intercom and said, ‘I’m just gonna tell you right now. You’re gonna be singing this song for the rest of your life. It’s going to be amazing.’”

Dimebag was shot dead on stage in 2004 while performing with Damageplan, featuring Vinnie Paul, who formed Hellyeah two years later.

Hellyeah’s album Undeniable was released today (June 3). It can be purchased on iTunes.