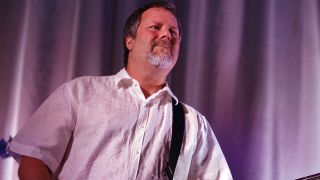 Faith No More will release a 30th anniversary edition of their debut album We Care A Lot next year.

Bassist Billy Gould confirmed the news to Faith No More Followers and it’ll be packaged with bonus tracks and previously unseen photographs.

Reflecting on the album which featured frontman Chuck Mosley, Gould says: “There are probably things we could have done better, but at the same time I think that the performances were pretty damned good.

“And that had to do with us keeping focused and needing to work within budget restrictions. We rehearsed quite a lot before we went in to record, so we were ready.”

The band still play As The Worm Turns from the 1985 release – and Gould says they enjoy performing the track as it has a timeless quality.

He says: “It just has a natural flow and it doesn’t seem to age the way some of the other songs have when it comes to playing them live.”

The album will be released via Koolarrow Records and further details will be issued in due course.

Faith No More released their seventh album Sol Invictus earlier this year – their first studio work since 1997’s Album Of The Year.