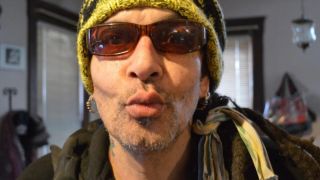 He’ll play eight dates across the US and hints that there are shows in the UK and Europe to be announced.

Mosley says: “When you’re young and touring around, even the second or third time, you’re thinking about how much you drank last night and what girl was cute all that kinda crap. And you’re looking out the window, but you’re not seeing.

“I guess the one thing about being older is that I will be taking it in a lot more.”

The singer says he’s most looking forward to returning to the UK and mainland Europe. He adds: “I’ve always been a groupie of England and Europe, but the people are really nice. When you go to London it’s kinda like L.A or New York, but I like it up North and Scotland. I just love it out there.

“I haven’t been out there in a long time and I can’t wait. No offence to America, it’s not the fans, or the kids, it’s just the distances between shows.”

Mosley is best known for joining Faith No More in 1985 and fronting the band for debut album We Care A Lot and follow-up Introduce Yourself. He was replaced by Mike Patton in 1988, but the pair shared vocal duties at a show in New York in 2010.

Meanwhile, Faith No More plan to issue a 30th anniversary edition of their debut album We Care A Lot via Koolarrow Records.