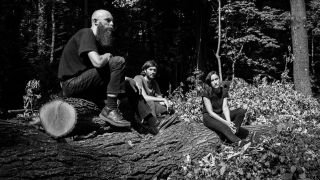 Esben And The Witch have issued a stream of their new track The Wolf’s Sun.

It features on the trio’s upcoming fourth album Older Terrors, which will launch on November 4 via Season Of Mist.

Rachel Davies, Thomas Fisher and Daniel Copeman say the song is an “ode to Luna, a blazing white rock” and add: “We find ourselves drawn to and driven by a night lust as old as the firmament itself.

“The first chapter marks the laden swagger of the satellite, a pendulous, ominous beacon. Switching to the second movement, the maniacal march of its wide-eyed disciples, entranced by its heady glow. Rampaging with hearts as swollen as the moon itself.”

Last month, Esben And The Witch unveiled Sylvan from the follow-up to 2014’s A New Nature, and gave details on the inspiration behind the title.

“We’ve spent eight years getting here, sweating on stages, holed up in studios and exploring all that which inspires awe and terror,” they said.

“The album features four tracks. In this digital age of music we wanted to create a collection that worked together but could also be separated, each track standing alone, carving its own path and telling its own tale.”

Older Terrors is available for pre-order from the Season Of Mist online store.