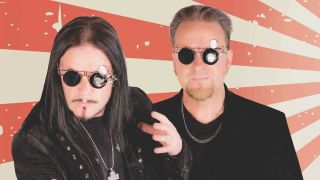 Anglo American melodic prog rockers Dukes Of The Orient have released a video for their brand new single The Monitors. The song is taken from the band's upcoming second album Freakshow which will be released through Frontiers Music on August 7.

"Working on this album has been a very cathartic experience,” states Payne. "The addition of Alex Garcia [guitar] and Frank Klepacki [drums] was a positive move for a more signature, cohesive sound. As with the previous album, we continue our rich analog keyboard approach layered with guitars by myself and Alex. Mixed and recorded on a traditional board with vintage outboard, we wanted to create an echo to the past and write songs with strong melodic content.”

Adds Norlander: "Freakshow is much more focused both in concept and in sound as it was written and recorded in a single year with a tight group of musicians. Our debut album came out fantastically, but it was recorded over the course of a decade with many different contributing musicians, and in many ways it sounds like that.

"Freakshow has the cohesiveness of vision where the same five musicians performed all the material that was written expressly for this album. I also think our writing on this album is more focused for the same reasons. After working together for so many years, I can write a vocal melody for John, he can write a keyboard part for me, and the parts just work right out of the gate.”