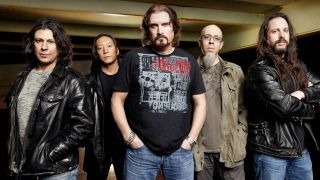 Dream Theater and Blue Oyster cult have been added to the bill for the inaugural Ramblin’ Man Fair at Mote Park, Kent, on July 25-26.

They join previously-announced headliners Camel and Marillion, plus Ian Anderson, Pendragon, Riverside, The Pineapple Thief and others.

It’s to be Dream Theater’s only UK appearance of 2015. The band recently confirmed they’d start work on their 13th album in February.

The Ramblin’ Man Fair – sponsored by TeamRock – offers a Classic Rock Stage and a Blues Stage alongside the Prog Stage. Further acts are to be announced soon.

Tickets are on sale now and every purchase comes complete with six months’ free membership of TeamRock+ which offers access to complete current issues of Prog, Classic Rock and Metal Hammer, along with 30 years’ of archive material. Early Bird general admissions costs £99 (plus £9.99 booking fee) while Early Bird VIP access is £180 (plus £15 booking fee). Membership of the Ramblin’ Man Fair Founders Club is also available, including two years of VIP tickets plus additional exclusive online content, merchandise and more.