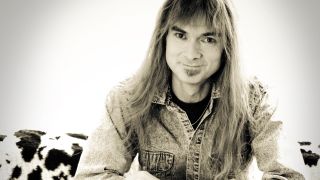 Arjen Lucassen says that Steven Wilson declined the opportunity to work with him because he considered his music “too old-fashioned prog.”

The Dutch multi-instrumentalist, who recently released his DVD The Theater Equation in which he took his 2004 album The Human Equation to the stage, says that he believes his own music is actually more modern than the Porcupine Tree mastermind’s work.

When asked if the duo will ever join forces, Lucassen tells Metal Wani: “Unfortunately, it’s not going to happen. When Steven started out with Porcupine Tree, I loved it. It was completely unknown.

“But I contacted him at the time – I sent him my albums and he sent me his albums, and we were emailing a lot. Then I asked for my album Into The Electric Castle, and I sent him the stuff and he said, ‘Man, this sounds amazing. It sounds great, one of the best things in this style I’ve ever heard – but it’s not my thing.’”

He continues: “At that time, he called it ‘too old-fashioned prog.’ It’s just that my music is not his thing. If it’s not his style, that’s his choice, of course.

“I find it a bit strange, because he uses Mellotrons, Hammonds synthesisers and old stuff, and his stuff may be more old-fashioned than my stuff. But I’m not gonna beg – if that’s his opinion, then he gets one chance and that’s it.”

Despite his disappointment, Lucassen says he would still be open to working with Wilson, saying: “It would have to come from his side.”