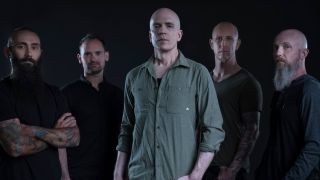 Devin Townsend has released a stream of his track Failure – taken from upcoming album Transcendence.

The follow-up to 2014’s Z2 is released on September 9 via Omerch and is available for pre-order in various formats. Failure can be heard below.

This week Townsend said the latest Devin Townsend Project album was his attempt to get over himself as a “controlling prog dude.”

He added: “I wrote 50 or 60 songs and kept sending them to everybody, the band, management and label. I asked them to tell me which ones they liked and so we’d start working on that. I narrowed it down to 10 or 11 songs, I took them to the band, and what I did, as opposed to directing every last detail, was start from the beginning, go through each riff and then discuss it.

“A dialogue opened up where everyone was contributing and talking about it, and in a way it moulded it into something where lyrically I could take that process and it became the theme of the album, ultimately.”

Transcendence includes a reworked version of the track Truth, which originally appeared on his 1998 album Infinity.

DTP have a widespread European tour lined up for early 2017.

Devin Townsend on the origins of Ziltoid