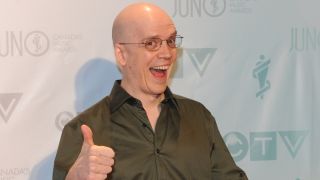 Last week Devin Townsend stopped by the Metal Hammer Radio Show to talk to Hammer Ed-In-Chief Alexander Milas about Ziltoid, his work ethic and selling out the Royal Albert Hall. And now you can read it for yourself!

Last time I was chatting with you, Casualties Of Cool had just come out and well, Ziltoid was but a blip on the horizon, and now how things have changed. Now, for people who don’t know about Ziltoid, the extraterrestrial sock puppet, where did he come from? Where were you when you came up with it all?

“I think he’s just a projection of a certain part of my personality and creative outlet that isn’t appropriate as much as it was when I was in my early twenties. So, when we had kids and when I got sober and, sort of just life changes in general, my connection to my childhood came roaring back and one of the biggest things in my childhood was the movie, The Dark Crystal, when I was a kid. You know, I was eight years old and it affected me a lot. So, I just got myself a chunk of clay and started making this silly monster, this puppet to follow in line with that and then as it happened I started looking around going, ‘Well, now I need the theme song’. So I wrote this theme song and thought of an outer space name, which was Ziltoid, and I have a propensity and a real interest in taking small things really far. So, what started as a lark for me has ended up being two records in and on this new record there’s literally thousands of people on it as well as multimedia and comics and all this stuff. So, Ziltoid is a very small idea that has gotten bigger than expected, I guess.”

**It sure has, but what’s fascinating about it all is that it is but one of many projects and endeavours that you’re taking on. Now, you mentioned your sobriety and it’s a common trait among people who are in a state of recovery to possibly replace their addictions with what you could describe as an almost superhuman work ethic. Would that be true of you? **

“Absolutely, and I think when I talk about sobriety, just to backtrack on that for a moment, the depth of how much I drank or smoked weed or whatever wasn’t actually a lot, I just think that my physiology doesn’t react well with much. So, keeping it clear really helped and the one thing, if anything, that I’ve learnt about myself as a result of recent projects specifically Z², is just what you’ve said, is that addictive part of your nature, which is ultimately trying to fill a hole in ways that have yet to be defined I think, for most of us, it sort of migrates to different things and that’s exactly what’s happened. Now that I’ve finished Z² and the workload was so extreme, and the repercussions of that workload, in terms of personal things and family and all that, are pretty obvious to me now, that that’s exactly what happened. You may stop drinking wine, but you need to fill that void and I think for me it went to work. So, I think from here on out, if the process is the same as it always has been, which is to try and progress, then the lessons learnt from this record are really important.”

It’s just so interesting though, because of course a by-product of that work ethic has been something you wouldn’t instantly describe as a commercial sell out kind of endeavour. Doing a concept record thematically linked to the idea of extraterrestrial invasion, embodied by a sock puppet, right? Are you amused by the fact that it sold out a legendary venue like The Royal Albert Hall in pretty much the blink of an eye, because I gotta tell you, I mean this as a compliment, I think it’s absolutely hilarious.

“So do I, I think it’s the best thing about it. You know, the music for me is never really the point, I mean, it’s the process if you want to look at it, so I’m not too precious about anything. That’s why there is so much, some of it that’s quiet, some of it that’s loud, some of its silly, some of its heavy. I want to savour it for a little while before I really start thinking about how we’re going to utilise that venue.”

You can listen to even more of Devin talking about Frank Zappa, King’s X and more over here on the Metal Hammer Radio Show.