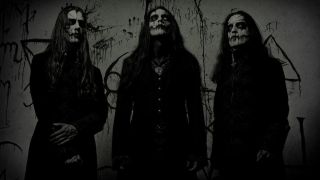 You know that bit in the Scarface remake when the camera pans from the people happily chatting in a car outside to the interior of a flat where a drug deal has gone wrong and now a man is being strung up and being carved in half by a chainsaw?

That’s pretty much the realm the Netherlands’ Carach Angren dwell in, only if Fritz Lang was behind the camera, an orchestra was playing in the same room and a bunch of utterly deranged bastards were relating the unfolding horror, like bards belched up from down below.

Released on February 23 from the French nightmare factory that is Season Of Mist Records, Carach Angren’s fourth album, This Is No Fairytale, is a carnivalesque whirl through the outer regions of depravity, narrated with slavering, wide-eyed rasp to a a series of baroque and blackened symphonic overtures that make A Night On Bald Mountain sound like Billy Bragg. Thanks to the genius of metal über-artist Costin Chioreanu, whose immediately identifiable, woodcut-style illustrations have already graced glorious videos by Mayhem and Vulture Industries, not to mention numerous record sleeves and swathes of Roadburn Festival posters, we have an exclusive stream of a lyric video for the song, There’s No Place Like Home, containing lines like ‘Mother was a skeleton whore fucked up wine and pills’ and alluding to the worst of horrors undergone behind closed doors with hallucinatory and aghast zeal.

Enter the portal that is There’s No Place Like Home below, and don’t blame us if you fail to find your way back.

Break into Charch Angren’s Facebook page in the dead of night here.

Pre-order This Is No Fairytale here.

And steal away with Costin Chioreanu’s mindboggling artwork here!