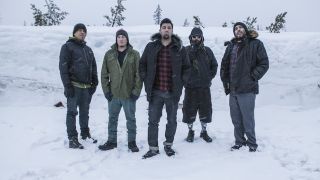 Deftones have been forced to postpone their entire North American summer tour with Gojira and Poppy.

The good news is, the band have moved quickly to announce the rescheduled shows, which will now all take place throughout August and September next year.

All tickets previously purchased for the 2020 shows will be valid for the new dates, while refund emails will be sent out to all customers.

The run of 26 performances will get under way at The Armory in Minneapolis on August 12 and wrap up at Portland’s Theatre Of The Clouds at the MODA Center on September 22.

Find a full list of the rescheduled shows below.

Deftones are the cover stars of the latest issue of Metal Hammer magazine which is on sale now. Across a 10-page interview, the band look back at their landmark White Pony album, which this year celebrates its 20th anniversary.

Last month, it was confirmed that White Pony will be reissued later this later alongside a DJ Shadow remix of the album titled Black Stallion.

Announcing the news, frontman Chino Moreno said: “We had that idea pretty much 20 years ago. I think even before we started recording White Pony, we had the idea to remix it, so this is something we always kind of joked about and now it’s actually coming to life.”