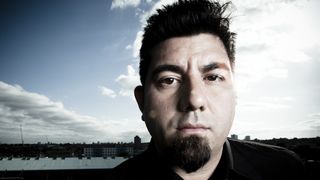 The Deftones singer has been at the forefront of alternative metal since the band first appeared in 1995 with their debut album Adrenaline, going on to influence a whole generation of rock bands. But it hasn’t all been plain sailing. “We’re lucky to have made it through,” he says. “I used to take it as far as I could.”

Here he ‘fesses up to the drugs, the fights and a paralysing fear of flying…

What’s your drug of choice?

“These days, I would say coffee. I like it because it makes me feel awake. I usually have a cup in my hands within 10 minutes of getting out of bed. That’s about as rough as I get these days, and it feels good.”

“I’ve never liked hallucinogenics. I don’t like crystal meth any more, but there was a time when I really did. It’s one hell of a drug – I’ll never touch that stuff again.”

What’s the weirdest thing you’ve seen while you were high?

“Probably myself in the mirror after being awake for days, even weeks at a time! We’re very lucky we made it through some of those times – I used to take it as far as I could. I don’t regret it because it’s part of who I am today, but I’m glad that stuff isn’t part of our lives any more.”

“Not once, and I’m quite proud of that. You can read it in two ways – either I’m an angel or I’m very devious! I know it’s not very rock’n’roll, but I’m lucky to say I’ve never even had a pair of handcuffs on.”

What’s the worst fight you’ve had?

“I got into a fist-fight with Stephen [Carpenter, Deftones guitarist] once because someone threw a pack of toilet roll at me while we were onstage. It wasn’t unravelled, so when it knocked me, it fucking hurt! I was fuming backstage because I felt stupid but Stephen thought it was the funniest thing and started filming me. I got angry and broke his camera, then he got pissed so I ended up jumping on his back and choking him. It got pretty rough!”

“I saw Robert Plant the other day – that was pretty fucking rad! We were staying at the same hotel in Chile and he walked right past me in the lobby. I’ve seen him in magazines since I was a kid, but I actually had to do a double take to make sure it was him! I was thinking about asking him for a picture but I know how annoying that can be, so I decided to play it cool.”

What was the moment you realised you’d made it as a rock star?

“I was really stoked when we started playing shows outside of Stephen’s garage! When we played our first show, there definitely was a moment where I felt, ‘Wow I’m in a band, that’s pretty cool!’ I don’t really consider myself a rock star, but I think that was when I first felt like a legitimate musician.”

What’s the worst idea you’ve had?

“I’ve had a lot of bad ideas, and probably will have a lot more! Abe [Cunningham, Deftones drummer] keeps trying to convince me that there are no bad ideas.”

What’s the worst thing you’ve ever read about your band?

“I’ve read a lot of stuff that isn’t flattering, like people calling us rubbish or shite. I try not to read too much into stuff like that – if we play a great show, I’ll go to sleep knowing we ruled. If we play a bad show, I don’t want to read about how bad it was!”

“I don’t really own anything expensive. I’ve bought stuff like jewellery and watches and then lost it. Nowadays I buy $20 watches so I don’t care if I need to buy a new one! I bought a hot-air balloon once, but it flew off and now Richard Branson has it!”

What’s the weirdest thing a fan has ever given you?

“Herpes? Just joking. A knife, a prosthetic limb… all kinds of weird shit.”

Have you ever uttered the words: “but don’t you know who I am?”

“I have, but not in that way. I might have tried it getting through airports or stuff like that, trying to get through customs quicker! But I try not to be that guy.”

Have you got any phobias?

“I hate flying, but I have to do it all the time. I guess it’s a phobia I just deal with. Putting yourself in a piece of metal that high in the sky always feels like a bit of a gamble to me.”

Who gets more action: singers or drummers?

“Drummers. I hear they bang all night.”