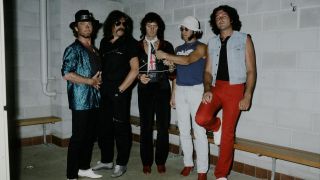 Deep Purple, Cheap Trick, Chicago, Steve Miller and N.W.A have been announced as next year’s inductees into The Rock And Roll Hall Of Fame.

The event will be held at Brooklyn’s Barclays Center on April 8, with public tickets set to go on sale in February.

Deep Purple drummer Ian Paice recently told Classic Rock he was unsure who would represent the band if they were ever inducted.

Paice tells Rolling Stone: “You’d like to think that anyone who was ever in the band and made a contribution should really be listed.

“All these people, from the very beginning to the current lineup, have helped maintain Purple as a viable touring entity. So to pick some over others, I wouldn’t have done it that way.”

Paice says that “it’s rather nice” to finally be inducted but admits he has no idea if former guitarist Blackmore will be there on the night.

He says: “He can confuse you sometimes. You think he’ll do one thing and he’ll do the other. I wouldn’t put money either way on that one.

As for playing with the guitarist again, Paice adds: “Some of us would think about it. Some of us probably wouldn’t. It depends how it’s presented and what everybody’s individual feelings are.

“But precedence must now go to the guys that are still working the name and keeping it alive. Their choice is final.”

Meanwhile, Cheap Trick guitarist Rick Nielsen says their induction is a personal career highlight for him.

He says: “Live at Budokan wasn’t too bad. Getting our first record wasn’t too bad. Doing 5000 shows, not too bad. It’s all good. This might get moved right to the top of our resume, though.”

Reacting to the news of their induction, Chicago co-founder Robert Lamm says: “I was very surprised that we’d been nominated since we’ve been eligible for so long. I think that the body of work, even just considering the work we did on the first album and beyond, changed the face of pop music for us to be considered influential.”

Steve Miller will take to the podium alone on the night, but says: “Anyone that was ever in the Steve Miller Band will feel that they were definitely part of what made the band.”

The event will be broadcast on US TV network HBO in the spring of 2016.