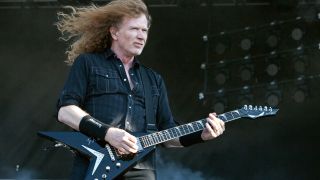 Dave Mustaine says he cried onstage while performing a Megadeth song he dedicated to late former drummer Nick Menza on their last tour.

The frontman describes his tears during the set as “heavy,” adding that he never truly realised how much he loved his former bandmate after their dispute over the failed Rust In Peace reunion.

He tells Kerrang: “The craziest thing was, when we dedicated a song to Nick on the last tour, I got about halfway through the song and I couldn’t sing anymore – I just started crying. I turned around and I stood next to the drum riser with my back turned, because I didn’t want anybody to see me. But it was heavy.”

He continues: “With all the stuff that was going on at the end, with Nick talking about me in the press and stuff like that, I had no idea how much I really, really love him. That was what was evident when I sang about him.

Mustaine also reiterated that he wants to organise a tribute show to Menza featuring all Megadeth members past and present if Menza’s family grant them permission.

He adds: “I think that instead of us all mourning and shit, we should celebrate his life and legacy. He doesn’t want people to sit down here and bellyache about that.

“He wants people to go and buy his pictures. He had some wonderful artwork. He had a lot of music that he’s done. He wants his legacy to be remembered, to support his kids.”

Megadeth are touring in support of their latest album Dystopia and played the Download festival over the weekend.