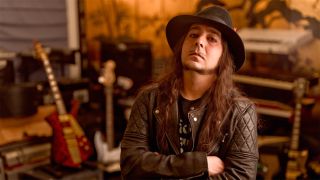 Daron Malakian’s Scars On Broadway have released a stream of their ferocious new single Dictator.

It’s the title track from their upcoming album, which is set for release on July 20 and follows Lives, which was unveiled back in April.

“Every time we'd play live, there'd be conversations like, ‘Maybe we'll do an album.’ So being the guy who wrote the majority of almost all the System songs in the past, I was like, ‘All right, let me see what's happening with it. Let me hold on to these songs and let me see how this develops.’

“We talked about it and we weren't all on the same page. Not everybody was into the idea. But every time we played live, it kept coming up.”

He added: “I just got to the point where a lot of people were asking about the Scars album, so I was like, ‘I’m going to put this album out.’

“Not knowing what's happening with System has kept me from putting my own stuff out. Too much time has passed, and I'm really excited to finally get some music out.”

Further Dictator details will be revealed in due course.