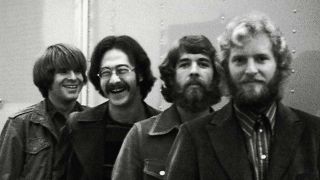 Creedence Clearwater Revival have launched the first ever official video for the classic Fortunate Son.

John Fogerty originally wrote the song about his time serving in the US Army Reserve, where observed that the children of presidents Nixon and Eisenhower were unlikely to be sent to fight in Vietnam.

Now, a statement from Craft Recordings reads, "Beyond its anti-war sentiment, Fortunate Son is an anthem for the 99%ers, condensing a critique of elitism and class privilege into three simple, but powerfully defiant words: It Ain't Me.

Craft Recordings partnered with director Ben Fee – who has previously worked with the likes of Band of Horses, The War on Drugs, The Lumineers and Aesop Rock – for the video, which celebrates working class America and its people.

"For me, protest right now is just showing pure positivity in the face of division and anger," says Fee. "I wanted to highlight the community and positivity that everybody shares... I wanted to show what America feels like when you actually hit the road and drive throughout the states.

"I met so many beautiful people. I went to the Taos Pueblo people, into their land, and met with the war chief, and they were very big fans of CCR. They were so welcoming because they knew the song and the band, and they really loved the idea of protest through positivity."

For more information on the 50th Anniversary celebrations, visit the Craft website.