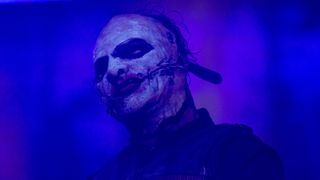 Corey Taylor has had another fan ejected from a Slipknot gig – this time during the band’s show in Concord, California.

It follows an incident in Toronto last month in which Taylor singled out a man in the audience, saying: “You don’t show me shit, you little pussy,” before security removed the man from the venue.

In the latest incident, video footage shows Taylor pointing at a man in the crowd and saying: “Get that guy. Get him out. That fucker with the glasses, get him the fuck out.”

The reasons for Taylor’s actions at the Concord gig are not clear. The video can be viewed below.

After the Toronto incident, Taylor said he felt bad for the ejected fan’s friend who had to leave with him as she was getting a lift home with him.

The vocalist said: “He was showing some serious disrespect. What you’re seeing is the culmination of me trying to ignore it for the entire show, and finally getting to the point where I’m like, ‘We’re not doing this any more. I’ve been doing this for 20 years now – I’m not doing that.’

“The thing that sucked, though, was the girl that was with him was a fan. She had to leave because he was her ride.”