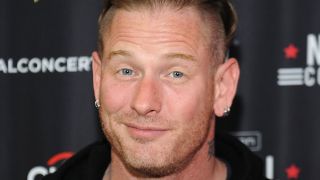 Corey Taylor accepts he should have allowed himself more time to recover from emergency spinal surgery before going back on stage with Slipknot – but he didn’t want to.

He remains unsure of exactly when he broke his neck, which led to the urgent procedure taking place last month.

But he believes his health issues could stretch 17 years into the past, when he fell off a stage and landed on his head.

Taylor tells 93X: “There was a host of different things, but the only thing I can think of is, I fell four feet off stage, landed. Being 25, I just kind of brushed it off – ‘I can still feel everything, I must be fine.’

“What had actually happened was compound fracture, and the doctor couldn’t believe that I was walking. It literally went from zero to surgery like that.”

But the frontman had known something was wrong “for the last few years.” He explains: “The strength of my right side was completely gone.

Taylor suffered a fall during the second Slipknot show since his return. But he says the video made the incident look worse than it was. “I jumped up, and as soon as I jumped I knew, ‘I’m not going to clear this,’” he recalls.

”It was wet, and that’s why. The reason I took my time was because I just wanted to make sure I didn’t break anything. The video looks terrible – but I’m laying on the ground just laughing my ass off.”

He says was instructed to rest for at least two weeks before performing again, and gave himself three weeks. He says: “Yeah, I probably should have waited a little longer. But I didn’t want to.”