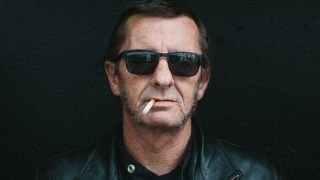 Former AC/DC drummer Phil Rudd says the lifestyle that led to his dismissal from the band is in the past.

And he’s aiming to put his career back on track with the re-release of solo album Head Job next month.

Rudd, who’s appeared on all but three of AC/DC’s studio albums, was charged with attempting to procure a murder in 2014, after becoming frustrated with the handling of Head Job’s initial launch.

Although that charge was dropped, he was later found guilty of threatening to kill and drugs possession, and sentenced to eight months of home detention in New Zealand. That led AC/DC to replace him with Chris Slade for their Rock Or Bust world tour.

Head Job will be relaunched on September 30 via Wave 365 media, and Rudd will undertake a media tour to promote it.

He says: “My hellraising days are over. I see a psychiatrist once a week and I’m closer than ever to my children.”

The 62-year-old retains his interest in luxury vehicles, with a collection including two Ferraris, two Lambourghinis, a Rolls-Royce and a helicopter. He says that when 1979 album Highway To Hell went multi-platinum he “went straight down the road to buy my first Ferrari.”

Rudd adds: “I still have all my flash cars – but now I want to grow chillies.”

AC/DC’s future remains in doubt after the retirement of mainman Malcolm Young, the departure of frontman Brian Johnson and the upcoming retirement of bassist Cliff Williams.

In May Rudd discussed the possibility of returning to the Aussie giants, reporting: “I’m not saying I never hope of ever playing with AC/DC again – but then again, is it even AC/DC any more? No Bon’s beautiful voice. No Malcolm. No Brian.”