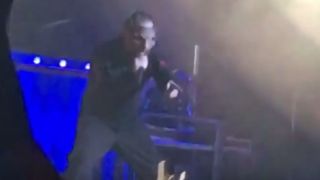 Taylor deals with the fan

Corey Taylor has been caught on video having an audience member kicked out of a Slipknot show.

The frontman lost his temper after someone showed “disrespect” while the band performed in Toronto last week.

The clip was posted soon after Taylor slapped a phone out of a fan’s hand at another show – and around the time Slayer frontman Tom Araya dealt with someone who spat on him as a concert began.

Taylor is seen in the latest video pointing at someone in the crowd and saying: “You don’t show me shit, you little pussy.”

He gestures that the person should leave, then continues performing while pointing, until security staff follow his finger and remove the person from the show. He then says: “Bye-bye. Yip, bye-bye, bitch.”

Taylor later tweeted that he’d had a male fan ejected, although a female had left with him, and added: “I’ve been doing this too long to deal with that disrespect.”

Slipknot are touring North America with Marilyn Manson. The trip was delayed after Taylor underwent emergency surgery for a broken neck – which he didn’t know he had.