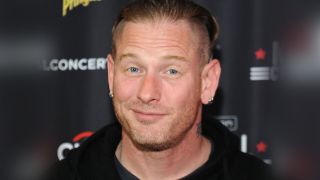 Corey Taylor’s message to the girlfriend of the man he had kicked out of a Slipknot show is: “Honey, get a better dude.”

Taylor was captured on video shouting at a member of the audience in Toronto earlier this month, telling him: “You don’t show me shit, you little pussy,” before security staff removed him.

But the vocalist regrets the fact that the person’s girlfriend had to leave too.

Taylor tells Q103: “He was showing some serious disrespect. What you’re seeing is the culmination of me trying to ignore it for the entire show, and finally getting to the point where I’m like, ‘We’re not doing this any more. I’ve been doing this for 20 years now – I’m not doing that.’”

He says the actions in question are “nothing I can say on the radio,” although Blabbermouth reports witnesses suggesting he was “hurling insults” and “attacking people in the crowd for no reason.”

Taylor continues: “The thing that sucked, though, was the girl that was with him was a fan. She had to leave because he was her ride.

“I felt bad for her. But, honey, get a better dude – that dude you’re with sucks at life.”

Slipknot are currently touring North America with Marilyn Manson. The trip was delayed after Taylor underwent emergency neck surgery, and although he’s admitted he went back on stage too soon, he’s enjoying the challenges of delivering shows during his recovery.