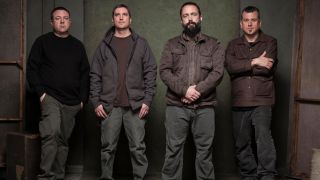 Clutch have announced a four-date UK tour for this December.

It’s a continuation of their Psychic Warfare World Tour and will follow a run of shows in Germany in Switzerland.

And they’ve confirmed they’ll be bringing Valient Thorr and Lionize with them for the gigs.

Speaking about the band’s sound, frontman Neil Fallon recently said the band wanted to avoid playing it safe with their music, adding: “There are artists who see success with a song then try different versions of that song for the rest of their career – and that sounds very depressing. I would rather take a risk and fail at it.”

In May, Fallon also reported that while the follow-up to 2015’s Psychic Warfare was still some way off, he and guitarist Tim Sult, bassist Dan Mains and drummer Jean-Paul Gaster had been kicking around some ideas.

“We’ll probably be going into the studio in about a year, so we want to be able to pick the best material,” he said. “If you don’t play or sing for a while, I mean its like exercise. If you don’t go to the gym for six months and try to go back, you can’t seem to do anything. I think it’s the same with music – you gotta keep moving.”

Tickets for the four shows will go on sale via Livenation on September 2 from 9am. The newly announced dates can be found highlighted below in bold.

Earlier this month, Clutch released a video for Psychic Warfare track A Quick Death In Texas.

The A-Z Of Clutch