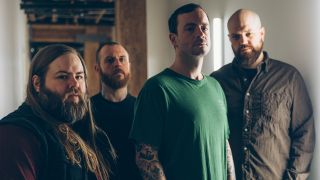 Cancer Bats have released a brand new single ahead of their UK and European tour.

The jagged Inside Out was recorded at the same time as the Canadian band’s 2018 album The Spark That Moves but has never been released before.

“Inside Out is such a gnarly beast of a song, that we all knew it would make for a rad track to release later and keep the vibe of The Spark That Moves going!”

Inside Out will appear on a new split seven-inch single also featuring Bleed From Within’s State Decay. The single is released on February 22 via New Damage Records and is available to pre-order now.