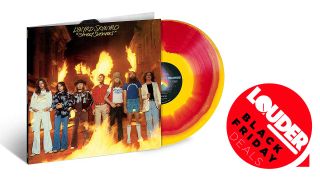 The biggest day in the Amazon calendar might be Black Friday, but vinyl lovers could be forgiven for thinking they're being neglected almost entirely. The retail giant focusses so much on the big, sexy hitters - headphones, it's own Echo Devices, and so on - that it feels like the so-called "vinyl revival" hasn't even registered.

Often other retailers are doing a better job, and there are Black Friday vinyl deals out there. Townsend music are offering up to 75% off vinyl and merchover on their site, Walmart in the US are doing $15 vinyl, and Merch giants EMP have a decent selection of vinyl.

There are some vinyl deals at Amazon, but the most interesting promotion is probably the one where they're offering up to 30% off limited edition vinyl.

The range isn't fantastic, if we're honest, but there are some lovely things on offer - all of them on funky coloured vinyl. We've selected a few highlights below.

Lynyrd Skynyrd: Street Survivors  £15.00
Street Survivors might be a memorial, but it is also, more simply, a great rock’n’roll record. And it features Skynyrd’s most beautiful song, I Never Dreamed, written by the doomed Van Zant and Gaines. And look at that lovely red and yellow swirl.View Deal

Lynyrd Skynyrd - Gimme Back My Bullets: £15.00
There’s plenty of grit and grease in this album – not least on its badass title track and the funky Double Trouble. Ronnie Van Zant - who didn't like the mix - was wrong: Gimme Back My Bullets is a Skynyrd classic.View Deal

Fall Out Boy - From Under The Cork Tree: £26.00
Bassist Pete Wentz says 2005’s From Under the Cork Tree was the sound of a band not knowing what they were doing. “We really had no idea what we were doing at the time," he says. "We were kids. Making it was like unprotected sex on a one-night stand, having a kid, and then the kid just happening to turn out really awesome.”View Deal

Paul McCartney - Amoeba Gig: £28.00
Amoeba Gig is the first full length commercial release of Paul’s surprise free concert at Hollywood’s Amoeba Music on June 27, 2007, a features a whole of a classics from that little-known pop act he was in. View Deal

Rodriguez - Coming From Reality: £15.00
Back in 1971, Coming From Reality was Rodriguez’s last gasp, the follow-up to the legendary Cold Fact and the final album he was allowed to record for the Sussex label. Seen the Searching For Sugarman documentary? Then you'll know why Rodriguez is special.View Deal

Soundgarden - Superunknown: £26.00
This was the album that propelled Soundgarden into the stratosphere, selling nine million copies worldwide and earning critical raves that positioned Superunknown in the classic pantheon.View Deal

Black Friday deals from around the web

Amazon.co.uk - new Black Friday deals every day
Adidas.co.uk - save up to 50%
AO.com - Black Friday deals on appliances are live now
Argos.co.uk - top savings on toys, TV and more for Christmas
Boots.com - save up to half price on selected items
Carphone Warhouse - early Black Friday phone deals
Converse - save 20% off Chuck 70s.
Currys.co.uk - Black Tag sale is now on
DNA Fit - up to 40% off DNA test kits
Dr Martens – Black Friday offers coming soon
EMP - for merch and rock'n'roll clothing. Save £20 on orders over £85
Etsy – original and collectible gift ideas
Firebox - crazy gift ideas and the world's smallest turntable
Google Store - a boatload of deals - including £70 off Pixel phones
Halfords - 20% off dash Cams, electric scooters and way more
I Want One Of Those.com - daft gifts and cool tech
John Lewis - Get great warranties with John Lewis' Black Friday offers
Lovehoney.co.uk - up to 50% off sex toys and more
Marshall - Black Friday sale coming soon
Mobiles.co.uk – cheapest mobile phone deals
Nike.co.uk - up to 30% off full price items
Nixon - home of the Metallica watch
PureScooters.co.uk - up to £500 off electric scooters
Simba Sleep save up to 40% on mattresses for Black Friday
Superdrug - top Black Friday deals at Superdrug
Townsend Music - up to 75% off CDs and Vinyl
Very.co.uk - big savings on tech and more