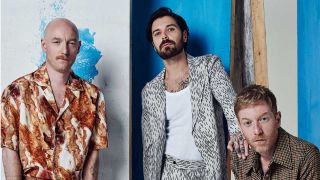 Biffy Clyro have announced that their upcoming ninth studio album will be titled A Celebration Of Endings.

Breaking the news via their social media channels, the band enlisted fans in an elaborate Instagram manoeuvre to unveil the album's accompanying artwork. Their followers were instructed to screenshot an Instagram story of the cover chopped up into little bits, in order to eventually piece together the artwork themselves. That's modern technology for you, folks.

On the track, vocalist Simon Neil says: “This time around we wanted to lead with something that was the most out there thing which we’ve got on the record. Instant History is the biggest, most slammest pop moment we’ve ever worked on.

“It’s a fantastic opening statement, although musically it doesn’t reflect the album’s direction. But thematically it’s a good pointer for what the album is about: learning from mistakes and realising how you can move things forward. Things can be similar although they’ll never be the same, but let’s not be scared of that.”

The new album is the follow-up to 2018’s MTV Unplugged: Live At Roundhouse London. It will be their first studio album since 2016’s Ellipsis.