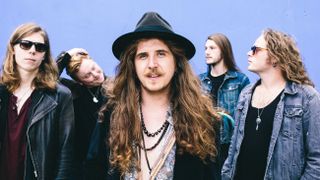 Bad Touch are premiering the video for their new track 99% with TeamRock.

It’s taken from the British group’s upcoming second album Truth Be Told, due for release on December 2 via their own Bad Touch Records label.

The band have also announced a UK tour with Australian rockers Massive, kicking off on November 19.

Bad Touch vocalist Stevie Westwood says: “We’re excited about getting back on the road and co-headlining with Massive. It’s going to be a great tour full of high energy.”

Truth Be Told was recorded at Mwnci Studios in Wales and features the singles 99% and Made To Break, both of which have been remixed for radio by Rolling Stones engineer and co-producer Chris Kimsey.

Kimsey says: “99% is a great song to ride around in cars and drink beer and smoke pot and listen to rock and roll on the radio. Not that I drink beer or smoke pot, but I remember the simplicity of music and life so it’s good to hear it is alive and kicking with Bad Touch.

“I heard something that evoked a good time melodic love song. It just needed some re-arranging and mixing to get to the heart of the song.”

Truth Be Told – the follow-up to last year’s Half Way Home –can be pre-ordered now.