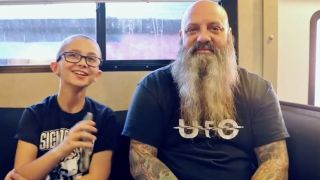 The guitarist says he was listening to music and drinking beer with his former Down bandmate when a knock at the door gave them all a fright. But it was what happened next that really chilled them.

In a light-hearted interview with Little Punk People, Windstein says: “I go open the door and there’s nobody there. I went back and sat in the chair and when I did I happen to glance over my right shoulder and there’s a doorway there…I saw somebody walk down the hall real quick.

“It’s weird because back then we used to crash at Phil’s because it’s almost like he didn’t want to be there alone.”

Asked why he didn’t leave, Windstein says: “I might have wanted to leave and go home but I didn’t want them to make fun of me, so I just drank more beer and I was fine. I’m not afraid of no ghost!

“If they’re real, I don’t think they can really hurt you.”

Windstein also discusses hair metal, politics and aliens and says that if he ever had to quit playing music, he might end up working as a greeter at Walmart.

“Hopefully I can play music for the rest of my life, but if I can’t I might end up being a Walmart greeter,” he says. “Nothing against them, a lot of them are friendly.”

Crowbar release their 11th album The Serpent Only Lies on October 28. They recently made the track Falling While Rising available to stream.

The band are on the road in North America.

Crowbar The Serpent Only Lies tracklist