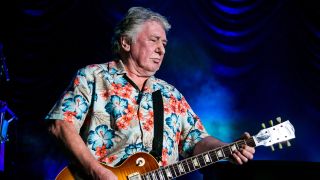 Bad Company have announced that guitarist Mick Ralphs has suffered a stroke.

The band, who just wrapped up their UK tour last week, say the 72-year-old is currently recovering in hospital. He was also forced to cancel his blues show at Jagz nightclub in Ascot on November 4 (tonight).

A statement reads: “The family and representatives of the band’s co-founder, guitarist and songwriter Mick Ralphs are sad to announce that Mick has suffered a stroke.

“Mick is receiving excellent medical care and is recovering in hospital, although all his public engagements are necessarily on hold, pending his improvement.

“Everyone is wishing Mick a speedy recovery, and further news will be announced at the appropriate time.”

Bad Company – featuring Ralphs, original singer Paul Rodgers and drummer Simon Kirke, along with guitarist Howard Leese and bassist Todd Ronning – played eight cities across the UK on their Swan Song Tour. It was their first trek in Britain in four years.

Ralphs was originally expected to sit out the recent UK tour, with former Black Crowes man Rich Robinson having filled in on the band’s earlier US dates.

Ralphs said before the US shows: “I’ve decided to sit this upcoming US tour out. The travel required to do these dates is something I’m just not feeling up for at the moment.

“I’m glad the band found Rich to take my place for this run, I’m sure he’ll be great.”