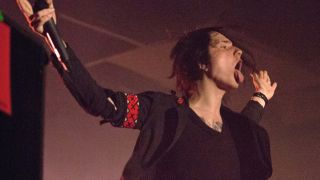 The metal outfit announced this morning that the former Make Me Famous singer was their new vocalist, replacing Worsnop who quit in January to focus on We Are Harlot.

But they’ve since revealed Shaforostov has been unable to secure a visa in time for the gigs at Manchester Academy on May 31 (Sunday) and London Underworld on June 1 (Monday).

Guitarist Ben Bruce says: “It is with a heavy heart and a great deal of frustration that I must regrettably inform you that our two UK shows have been cancelled due to visa problems.

“We have spent the last few days doing everything we possibly can to make sure that these shows wouldn’t be cancelled but at the end of the day the US government took far longer than anyone could have predicted giving Denis his visa which has left us no time to finish his visa process to enter the UK.

“You have no idea how much we were all looking forward to these shows and I promise you we will make it up to you. Myself, James, Cam and Sam will still be flying to the UK and will be at the venues on the day of each show to hang out with you guys.”

The band coupled this morning’s announcement by releasing a stream of their new single I Won’t Give In. All tickets for the cancelled shows will be refunded, the band say.

AA said earlier this month they had hired a replacement singer, but added that they wouldn’t name him publicly until this week.