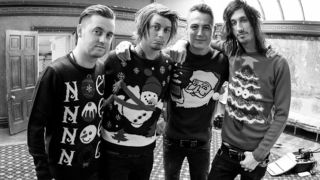 Asking Alexandria have confirmed their first shows with their new singer – but won’t name him until days before the gigs.

The band’s former frontman Danny Worsnop walked away in January to focus on his other band We Are Harlot. And now AA have announced dates in Manchester and London, but there is still no news on Worsnop’s replacement.

A band spokesman tells TeamRock: “There is no plan to announce the new singer until the week of the shows.”

AA will play at Manchester Academy 3 on May 31 and at London Underworld on June 1. Tickets go on sale at 10am on Friday via LiveNation.

They are also lined up to play a string of summer festivals, starting with Rock For The People in the Czech Republic on June 4. The Vans Warped tour sees them take to the stage across North America from June 23.