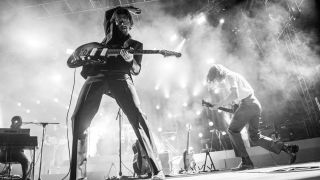 Alex Turner, Matt Helders, Jamie Cook and Nick O’Malley will take to the stage on June 7, with all profits from the show going towards the War Child charity.

War Child UK’s CEO Rob Williams says: “We are delighted that Arctic Monkeys will be dedicating their time and efforts to helping children affected by war by performing a show for War Child, and it is a huge honour that they have chosen to support us.

“The money raised from this show will allow us to continue our life-changing programmes and reach even more children who have had their lives torn apart by conflict.

“With 250 million children in the world today affected by war, the need is as great as ever to stand up for their rights.”

A ballot for tickets is now open and will remain so until 8pm GMT on Sunday, May 20. It costs £2 to enter, with that money also going towards the charity.

Those successful will receive an email on Monday, May 21, and will have 24 hours to purchase tickets, which start at £45. They'll be limited to two per-person.

Those buying tickets are reminded that whoever purchases them must arrive in person and show relevant ID. Twickets is the official and only re-sale partner and tickets will be marked invalid if sold or purchased through non official re-sale partners.

Earlier this week, Arctic Monkeys premiered a video for their single Four Out Of Five and appeared on The Late Late Show With James Corden to perform She Looks Like Fun. Both tracks feature on the band’s new album Tranquility Base Hotel & Casino.