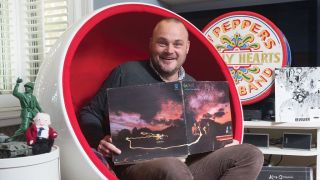 Like proper prog rock, I’m a double album so you have to listen to both LPs to get the full benefit!” Al Murray tells Prog in response to the news that he’ll host Progressive Music Awards 2019 on September 12 in London.

The annual ceremony turns eight this year as Prog celebrates its 10th anniversary. More special announcements are still to come and Murray says he’s already feeling the pressure, “I’ve worked my way through the ranks of just being one of the people at the table getting pissed to hosting it so I don’t know what I’ve got to do to top last year’s achievement! Wear a cape, go on too long, have a Zimmer frame? I dunno!”

The comedian, best known for his outspoken Pub Landlord character, found the rightful path to prog as a teenager when he first heard Genesis’ Seconds Out. He discovered King Crimson and Yes shortly afterwards and now counts the veteran bands among his favourites.

“To be on the stage last year, talking to Bill Bruford while Steve Howe was honoured as Prog God was a full-on pinch-myself-moment because this is the music I’ve always loved, all my life,” he enthuses. “Like a lot of prog fans, I’ve got the bands I liked from when I was a lad, from when I first fell in love with it all, but what I love about the Progressive Music Awards is being able to discover the best new music and acts. Part of the fun is finding out about music that’s gonna be of a certain texture and I’ve really fallen in love with a lot of new music over the last couple of years. For example, I absolutely love Tim Bowness’ Lost In The Ghost Light and that won Album Cover Of The Year in 2017. I probably wouldn’t have found out about it if it hadn’t been for the Awards.”

Of the atmosphere at the previous ceremonies he adds, “What I really love about the event is that there’s a sense of being in a congregation of prog. We might not agree on everything, but we’re all of the same denomination in the room!”

This year’s Prog God is still to be announced, but Murray already has a few predictions of his own. “Robert Fripp invented the genre so I’d nominate him but he’d probably say ‘no’ because he doesn’t like the categorisation, so I’d like to be a bit controversial and nominate Phil Collins instead. I know there’s a whole school of thought that he turned into a pop star but in my view, he is a Prog God. Even when he stopped doing prog, he still progressed!”

Has he chosen correctly? Keep your eyes on Prog for a big announcement in the coming months. In the meantime, you can make your voice heard by voting in the eight ‘readers’ choice’ categories, which include Event Of The Year and Album Of The Year. Make your selections via: www.loudersound.com/progawards. And don’t forget to follow our website for all the gossip on the night.

“I’d like to say ‘good luck’ to all the runners and riders,” adds Murray. “The joke is that the Progressive Music Awards go on too long so I’ll be doing everything I can to make sure that doesn’t happen!”

Meanwhile, Al Murray will be making an appearance as the Pub Landlord at this year’s Edinburgh Festival Fringe and will resume his Landlord Of Hope And Glory Tour this autumn. He can also be found playing drums with funk rockers Fat Cops who’ll be touring with The Happy Mondays later in the year.