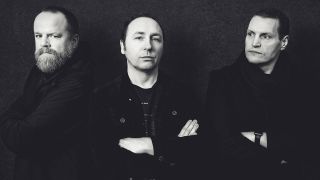 Norwegian prog rock trio Airbag have premiered their brand new video for Sunsets with Prog. Sunsets is taken form the band's upcoming album A Day At The Beach, which will be released through Karisma Records on June 19.

"Sunsets was written during the early stages of making the new album," the band tell Prog. "We spent a lot of time trying different arrangements and just jamming together, which was something we hadn’t done for a while. We brought in Kristian Hultgren from Wobbler on bass and Ole Michael Bjørndal from Oak on guitar and they both contributed to the arrangements. As with the first single, Machines and Men, Sunsets has that contrast between hard edge rock and electronic elements, which is something we’ve tried to achieve throughout this album. The lyrics deal with the destructive forces of our lives and our society, perhaps underlining the overall theme of the album."

A Day At The Beach features six new songs recorded during autumn and winter of 2019-20 and has been inspired by the resurgence of 1980s electronica, new wave and movie scores. The album was produced by vocalist Asle Tostrup (who also designed the album cover artwork, and Bjørn Riis, engineered by longtime collaborator Vegard Sleipnes and mastered by Jacob Holm-Lupo.