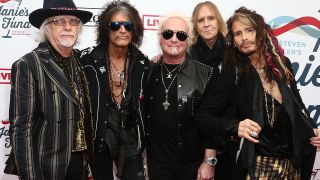 Aerosmith have announced details of a European tour which will take place next summer.

The band will play a total of 14 shows, kicking off with a performance at Milan’s iDays festival on June 13 and wrapping up with a set at Mönchengladbach’s Sparkassenpark on July 27. They'll also perform two shows in the UK: London’s O2 on July 15 and the Manchester Arena on July 18.

The tour announcement comes hot on the heels of Aerosmith’s successful Deuces Are Wild Las Vegas residency, with the tour lined up as part of their 50th anniversary celebrations.

Tickets will go on sale next Friday (December 13) from 9am local time through Aerosmith’s official website. Find a list of dates below.

In January last year, guitarist Joe Perry said he would like the band to record a new album or EP.

“We haven’t gotten down to things specifically, but I really would like to record some new music. It’s kind of in that chill time right now for Aerosmith.”

As for their 50th anniversary plans, he said at the time: “1970, to me, is where my heart is as far as when the band started – and the 50th anniversary, so that’s what we’ll be celebrating.”