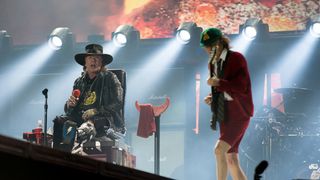 Axl Rose is sitting. It’s not the Grohl throne borrowed for Coachella, more a La-Z-Boy Recliner with an elevated platform for his injured foot and a side table for drinks. Were it not for the lightning bolt adorning the underside of his medical boot you might think he was about to binge on House Of Cards rather than spend two hours fronting the world’s greatest rock’n’roll band, and it doesn’t look right. But that’s not all. He’s on time.

Then again, AC/DC are a band who’ve never pissed about. Back in 1980, after Bon Scott was pronounced dead on arrival at a South London hospital, the Young brothers briefly considered calling it quits before hiring his replacement, and just seven weeks later Brian Johnson was in the Bahamas recording Back In Black and working on his tan. The AC/DC machine did what the AC/DC machine does: it rolled on.

You wonder what modern social media would have made of a transition that, from this distance, seems to have been made with almost indecent haste. Accusations of greed and lack of respect would certainly have flown.

The very public apoplexy that’s greeted the arrival of Brian Johnson’s stand-in does offer some clues, although the situations are clearly different. Johnson is very much with us — although his departure has been handled undoubtedly badly — and the new guy isn’t a loveable geezer in a flat cap only familiar to those who saw Geordie play Electric Lady on Top Of The Pops in 1973, but Axl Rose. Axl fucking Rose.

“It’s turned into a beautiful sunny day suddenly,” says Axl Rose, the singer in AC/DC. “Nice to meet you!”

As introductions go it’s hardly Welcome To The Jungle, but he does have a point. For most of the day the wind has howled and the rain fallen sideways, and the back half of the Passeio Marítimo de Algés venue — a grass and concrete lot on the banks of the Tagus River, just west of Lisbon — has been turned into slurry. But the sun pokes through as a well-received set from Tyler Bryant and the Shakedown warms up the crowd, and by the time AC/DC hit the stage the audience has stopped huddling together for warmth like penguins at the Pole and are very apparently Ready To Rock.

And Axl? To use the parlance of TV talent shows, he nails the songs. From the opening Rock Or Bust it’s obvious he can “do” Beano. He follows it up with a searing Shoot To Thrill, before a swaggering, confident romp through Hell Ain’t A Bad Place To Be shows he can “do” Bon too. By the end of High Voltage his good foot is pumping up and down like a jackhammer as he flips the mic from one hand to another, and as Hells Bells climaxes he’s screaming so hard your fear his throat might explode through the top of his leather-hatted head. He even ad-libs, dropping “Portuguese thighs” into You Shook Me All Night Long. It’s an astonishing, tour-de-force performance, and he looks like he’s genuinely having fun.

AC/DC are sounding just like AC/DC. As they should. Cliff and Chris and Stevie provide the engine, Angus spins and pirouettes and duckwalks and does that curious shuffle and gurns like a man with a mouth full of rancid treacle, and everything comes together as it should. The only odd thing is how chatty Axl is. He introduces Back In Black with “You ready to turn it up? Here we go now!” and ends it with an insouciant “Woohoo! That was a fun one!” Dirty Deeds Done Dirt Cheap is “a little ditty about how to take care of business.” Let There Be Rock? “We’re gonna get a little bit biblical on you.”

Axl’s also clearly spent recent weeks pummelling Angus for trivia with fanboy enthusiasm. He tells us that AC/DC are the world’s biggest exporter of devil horns. He reveals that early in their career, the band’s American record company hired a plane to fly past one of their outdoor shows trailing a banner reading, “Play Rock ‘N’ Roll Damnation,” because it was doing well at radio but wasn’t in their set. It’s at these moments that it feels most like a tribute show, with an excited fan thrust into the spotlight, but the stories are told with such obvious delight you can’t help but be charmed. And if the evening couldn’t get any more bewildering, a chant of “Axl! Axl!” rises from the crowd, but he corrects the unruly mob with a modest, “you mean Angus.” We even get surprises, with Riff Raff the unexpected meat in the traditional Highway To Hell/For Those About To Rock encore sandwich.

So what the hell is going on? Is this a new, humble Axl, about to unexpectedly breath life into an ageing band while working angles on his own redemption? On this showing, it really feels like it could work.

And he did it from a chair.

Setlist
Rock or Bust
Shoot to Thrill
Hell Ain’t A Bad Place To Be
Back in Black
Got Some Rock & Roll Thunder
Dirty Deeds Done Dirt Cheap
Rock ‘N’ Roll Damnation
Thunderstruck
High Voltage
Rock ‘N’ Roll Train
Hells Bells
Given The Dog A Bone
Sin City
You Shook Me All Night Long
Shot Down in Flames
Have a Drink On Me
T.N.T.
Whole Lotta Rosie
Let There Be Rock